Rally Monkeys with Halos Are Swinging from Oak Trees

It’s early August and the dog fights are in full swing. Many predicted that the fight would be between the Angels and Rangers. Somehow the Oakland Athletics found a way to crash the party. I can’t really say that’s a bad thing, for Angels’ fans like me Oakland is a big part of the equation. I am actually glad that that they are part of the division battle and hopefully they knock out the Rangers for us. An Angels-A’s battle is more familiar and is much more meaningful for fans at least in California.

Oakland and Anaheim are separated by roughly a little bit more than 400 miles. For the most part of the first decade of the new millennium the Angels and A’s traded division titles. I distinctly remember at least three of the titles that the Angels captured were against the A’s during the last series of the season twice at the Oakland Coliseum and once at Angel Stadium. I recall these instances vividly since I was there for all three.

Believe it or not, the rivalry has its charm. I don’t know of any other team in baseball where you can be a wheelchair user and get field level seats at equal price maybe a bit more than the upper-level seats anywhere around baseball other than the Oakland Coliseum. Since I attended college in the Bay Area I was a regular at the Coliseum when the Angels played the A’s.

I can remember vividly fans coming in their stadium with devil horns and rally monkeys tied to a rope as if hanging from a noose and the fans spinning the monkey around as they exclaimed “Let’s Go Oakland!” The young women showing their Oakland pride by wearing skintight green baby doll tops with a yellow A’s logo that has fake rhinestones glued inside the letter and their hip hugging apple bottom jeans. (What can he say, I’m a guy) although it down inside I wish they were wearing a red top, with a red “A” with a rhinestone halo around it. (A man can dream, can’t he?) 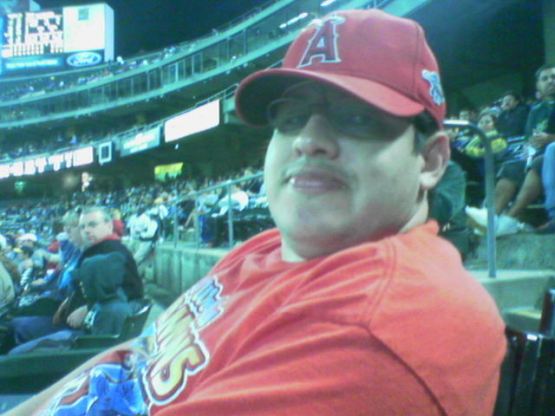 The Angels contingent was usually pretty strong and well represented there is usually plenty of people there who are fellow Angels’ fans to high five. The 400 miles means nothing if someone loves their team that much. Besides, The Bay Area is a beautiful area as well so Angels’ fans get treated to quite an experience when they go to visit Oakland.

I found myself debating whether I should take the 90 mile trip on the Amtrak from the state capitol to Oakland to watch my beloved team now that the games against the A’s means so much, and if I wasn’t going home later this month to see the Angels against the Indians I would probably consider it. Oakland Coliseum, I miss you! 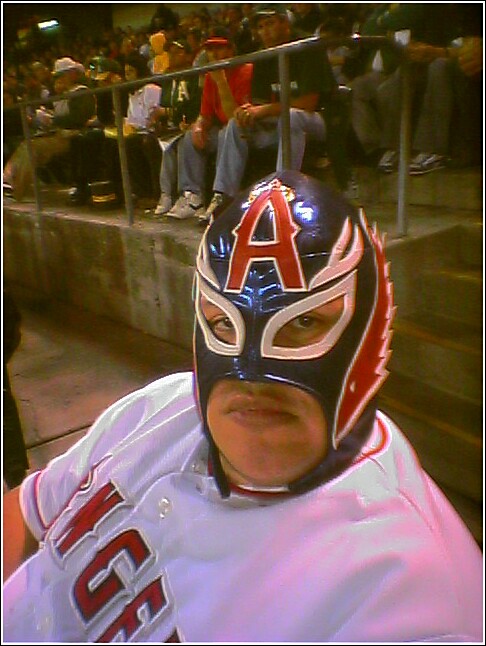 Okay, enough reminiscing, the Angels split the latest series against the Rangers 2-2. They might as well have been exhibition games since the Angels arrived five games back for the division lead, and they left Arlington five games back for the division lead. They then went on to lose two out of three against the Chicago White Sox. All in all, they came out for the onslaught okay, relatively speaking since they only had a net loss of one game, now, the Halos find themselves six games back of the Rangers when it could’ve been much worse.

The offense is fine, yes, it’s the bullpen again, they can’t seem to hold leads late in the game. Yes, one can explain away by using the injury to Scott Downs, one of the two only reliable bullpen members in my opinion in the Angels’ bullpen. the head scratcher is, why not leave Garrett Richards as part of the Angels team so he can help them solidify the bullpen. Even better, leave him in the starting rotation and send struggling pitcher Ervin Santana to the bullpen?

Whether one blames the on the bullpen, or whatever dynamic they choose, I believe the problem is much deeper than that, it’s a problem that the Angels have been facing since 2010; their inability to defeat their division opponents when they should. That’s what makes this series against the Athletics that much more important on the one hand, they need these games to cut significantly into the Rangers’ lead it’s starting to get a little too close for comfort. At the same time they have to hope that some other team defeats the Rangers in order to make this hypothesis feasible.

On the other hand the Angels need to prove themselves that they can defeat division opponents. While at the same time sending the message to this Oakland team that the Halos are not going away anytime soon. It is my humble leave in order to get these two goals are accomplished they must sweep the Oakland Athletics and hope they get some help from other teams in the Rangers’ upcoming series.

Nothing is set in stone and it’s still early enough in the season that things can change in this wonderful division. If anything, this battle serves to put the rest of baseball on notice that the American League West is a pretty tough division. Go Angels!