You’re a Mean One, Mr. Grinch

I am still extremely sore about losing Torii Hunter. It’s still unbelievable that the Angels did not give him a qualifying offer, and at the very least guaranteed the organization compensation draft picks for his departure. I know I’ve mentioned this in previous entries and now it is water under the bridge, but I believe that the loss of Hunter will be key in the organization. There is no true leader in the clubhouse, hopefully Albert Pujols by now is comfortable enough to take that role, I can also see Mike Trout in that position in the future, but it might be a little much to ask of a second-year player.

Torii Hunter however did make a statement directed towards the Angels’ fan base organization and ownership. A very classy move in my opinion, he will be missed: 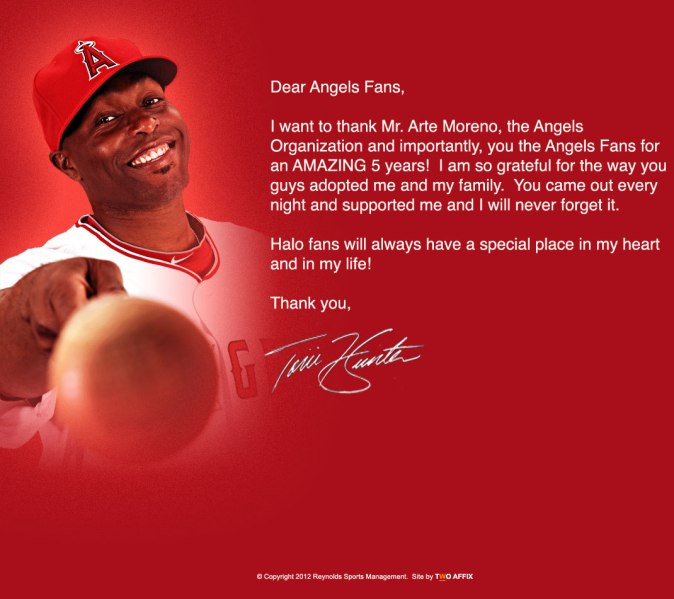 The Christmas Grinch stole Hunter, but will he steal Zack Greinke? I sincerely hope not. With the acquisition of Joe Blanton and other arms in the bullpen however, it’s looking like they Greinke reacquisition is less likely.

I really don’t know what to make of the Blanton acquisition, Joe Blanton over Dan Haren? Really? Dan Haren is a quality pitcher who just had an off year, Dan Haren should have been a top priority especially with the struggles of C. J. Wilson last year. I am definitely not convinced that Blanton is a better option over Dan Haren.

The Angels seemed to have retooled their bullpen, these moves to me to not make us a better team than we were last year especially since we have yet to re-sign Greinke. The Christmas Grinch might still get his way. He is a mean one, that Mr. Grinch.