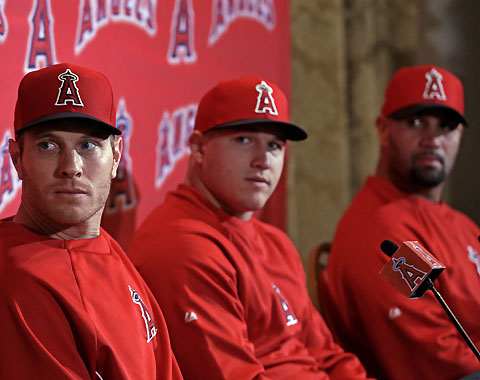 The smell of freshly cut grass is in the air, the wet color of red clay that distinctly characterizes the infield and the warning track igniting the dreams of baseball fans around the major leagues and the world. The fire that warms the soul fueled by the flames of excitement. The core element that is part of the foundation of every baseball fan. Indeed, this is the year that their respective team wins the World Series.

For this Angels’ fan, the feeling is no different, opening day is but a few short weeks away and in 2013 the Angels organization as well as their fan base has high expectations. No, I’m not talking about those bandwagon fans whose members seem to thankfully decrease with every passing season; I’m talking about diehard fans like myself who weren’t even aware that a bandwagon existed. You see, before Matsuiland, ToriiTown or even the Trout Farm, existed Wally World. I am lucky enough to have experienced one World Series championship in my lifetime but certainly I am yearning for more.

The Angels have no shortage of talent in recent years, this off-season they have added Josh Hamilton, Jason Vargas, Tommy Hanson, Joe Blanton, and Ryan Madson just to name a few. The Angels had no shortage of offensive firepower last year however; both the starting rotation and bullpen were disastrous it was my contention this off-season that not exercising Dan Haren’s option for the 2013 season was a mistake. He had an off year and he wasn’t completely healthy. It has yet to be seen if both Blanton and Hanson can shore up their less than stellar starting rotation from a year ago.

I shy away from making any predictions prior to the start of Spring Training; I usually wait until the first few games of the preseason are played. It’s way too early to get into a discussion about end of the season standings and postseason appearances, for now I am just longing to hear the roar of the crowd the crack of the bat, and the slap of the ball against a leather baseball glove.

I share your opinion of Haren — last season was a bad fluke and I think the Angels would have done well to keep him. But, hey. Spring Training, hope springs eternal and all that. I’d be lying if I said I wasn’t excited and hopeful even if I’m not in love with every personnel decision. 🙂
— Kristen

Kristin,
I am also very excited I can’t wait for the season to get started. I’m not in love with the back end of our starting rotation. Hopefully the bullpen doesn’t fall apart this year. If they do, it doesn’t matter how powerful our offense is, we’ll going to be in trouble. I’m crossing my fingers and toes that our pitching situation will improve.

Pingback: Stomper Mercilessly Stomps out the Rally Monkey Then Swept Him Away « The Angels' Ace

Pingback: The Halo is Burnt Out For the Rest of This Season « The Angels' Ace